Preparations are well under way for this years fete. We are hoping for glorious sunshine again which encouraged record crowds and made last years fete such fun!

The next Everdon Fete Committee meeting is in the Village Hall on July 17th at 7.30pm. 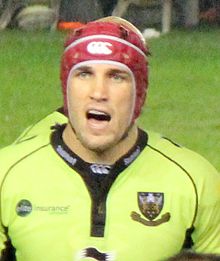 Day previously played all of his professional career at Sale except for a short term contract at French giants Stade Francais. In the 2005-6 season Day played as a replacement in the final as Sale Sharks won their first ever Premiership title.He has now made more than 100 appearances for both Northampton Saints and Sale Sharks. In this time he has won:- 2 Premiership Titles (once a losing finalist) 3 European Shields (once a Heineken Cup losing finalist) 2 National Cups (three times a losing finalist) 1 Premiership A League TitleIn 2014 he was voted Northampton Saints Player of the year as part of the 2013/2014 Double Winning Squad.He has represented England Saxons, Captained England Under 21s, England Under 19’s and represented England schools.

He is currently Vice Chairman of The Rugby Players Association.

Made of unbleached high class cotton and once again using  a picture of the historic bridge in Everdon which has become the Fete Logo.

They will go on sale on fete day for £4. They are a limited edition and are likely to be very popular so preorders can be made by contacting everdonfete@gmail.com

Thank you to for our kind sponsors . Their sponsorship has meant that the production costs have been covered so all of the £4 goes to fete funds.

Come along to the fete to meet a Northampton Saints player who will open the fete. He will open the fete, judge the Fancy Dress Competition and sign autographs including signing a fete T towel which will be a prize in the Grand Draw.

This is earlier than in previous years. No one will be allowed to pass after this time.

Please  tell all your visitors who want to park in your driveways to arrive before this time to avoid disappointment!

All preparations are well  under way and plans have been finalised. The bunting is up , cakes are being baked ,posters advertising the fete have been displayed and the new signage will be put up this week. The final fete committee meeting is on August 18th 2015 in the Village Hall at 7.30 pm.

Calling all Everdonians! We are opening up a competition.

Whoever can sell the most raffle tickets will win our grand prize!

Tickets will be delivered to your door, so go out and sell, sell, sell!

If you run out you can always get more from Jan Clark at Meadow View, Stubbs Road.

Good luck, and may the best person win!

Breaking News! This year we are selling the Everdon Fete Bag. These are custom made Jute bags . We chose the old stone bridge as our  village Logo and we used adaptations of Amanda David and Pam Neville’s drawings of the bridge.    We are grateful for our Sponsors who have generously donated towards the production costs. We will sell them on fete day and they will be available at all stalls. The best part is they’re only £3 each!!

Thanks to Lizzie Barwood for the  great idea and for her hard work sourcing and designing the bag.

The last meeting was very successful. It was a fun evening and to my great relief and your kind support all the major jobs have been allocated.

If you cannot make it please send any ideas or suggestions for the fete in general (or the website) to the committee: everdonfete@gmail.com